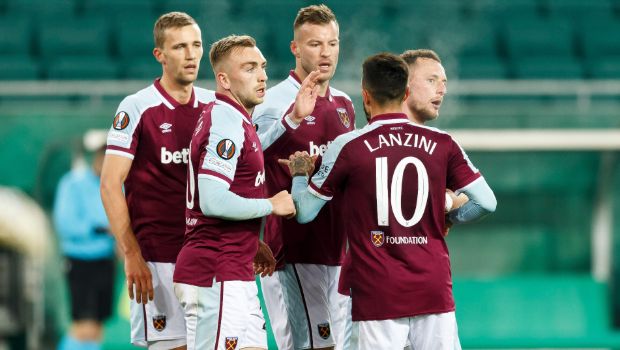 West Ham United secured their qualification into the next round of the UEFA Europa League on Thursday evening when the Hammers beat Rapid Wien in Austria.

The Londoners needed a win to be assured of a place in the next round of the Europa League and the win seemed on the way when Ukrainian Andriy Yarmolenko opened the scoring with five first half minutes left to play.

However, there was still plenty to play within the remaining five minutes left as Rapid Wien’s Maximilian Hofmann commited a foul in the box. The resultant spot kick was converted by Mark Noble in first half stoppage time.

West Ham failed to get any more goal and neither did the hosts Rapid Wien who remained bottom of the log with 1 point from five games played while the Hammers topped the group with an unassailable 13 points lead with a game to spare.

David Moyes’s side will face Manchester City at the weekend in the Premier League at the Etihad stadium.

Meanwhile, ten-man Tottenham were beaten by Mura in the UEFA Europa Conference League on Thursday evening. Everything started looking badly from the 11 minute when Tomi Horvat opened the scoring for the home side.

Ryan Sessegnon was then sent off 32 minutes into the game after a second bookable offence. While Spurs were able to equalise in the 76th minute through Harry Kane, Mura were not to be denied as Amadej Marosa scored the winner deep into stoppage time.

Antonio Conte’s men will now shift attention to the Premier League where they will face Burnley at the Turf Moor.