Pablo Zabaleta: Diafra Sakho can have a ‘big impact’ 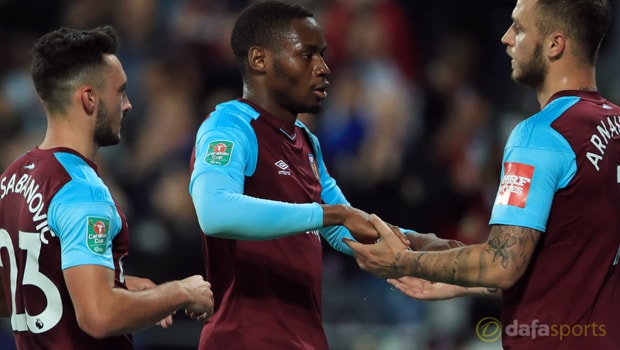 Pablo Zabaleta insists that striker Diafra Sakho can have a “big impact” on West Ham’s season after being impressed by his recent goalscoring exploits.

The Senegal international is now into his fourth season with the Hammers but has struggled for form after hitting double figures during his first campaign.

Sakho found the back of the net just once in the Premier League last term, having featured only four times, however he has already turned out on six occasions in 2017-18.

The 27-year-old, who bagged for Senegal in their 2-0 victory over Cape Verde on Saturday, scored the winner in West Ham’s most recent outing as they saw off Swansea 1-0 at the London Stadium.

The former Metz hitman boasts three goals in all competitions for West Ham, having scored in the Carabao Cup triumphs over Bolton and Cheltenham.

Zabaleta insists he has been impressed by Sakho’s attitude this season and feels he will have a big role to play over the course of the campaign.

“Diafra can have a big impact for us because he’s a great player, but it is all about confidence,” Zabaleta told West Ham’s official website.

“He’s not been playing much in the Premier League aside from coming on for a few minutes and his only starts have been in the Carabao Cup.

“This is what you expect from players like this who, even if they are not starting the games, they come on and give 100 per cent even if it is only for 10 minutes. He did that against Swansea so I’m very pleased for him.”

West Ham’s next assignment is on Saturday and they can be backed at 2.88 to come out on top against Burnley. The Clarets are priced at 2.63 to claim all three points while the draw is available at 3.20.