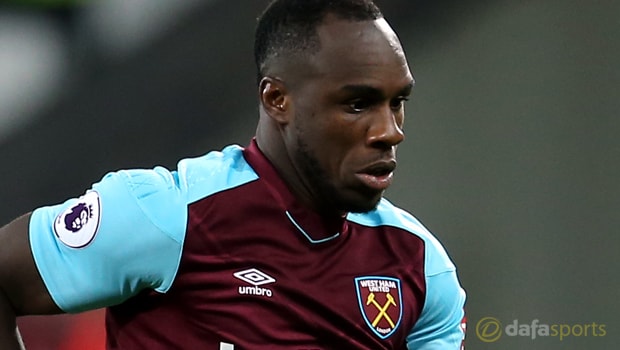 Michail Antonio says West Ham always up the ante when taking on Tottenham Hotspur and he is adamant another victory can be picked up against their rivals this weekend.

West Ham endured a difficult start to their Premier League season, losing the opening three matches to Manchester United, Southampton and Newcastle, but they have started to turn things around slightly.

The Hammers defeated Huddersfield 2-0 on September 11, drew 0-0 with West Bromwich Albion before beating Bolton Wanderers 3-0 in the third round of the Carabao Cup.

Slaven Bilic’s men welcome Spurs to the London Stadium on Saturday for the early kick-off and the hosts will be hoping to continue their impressive form against their rivals.

Following two successive 1-0 home wins over the Lilywhites, West Ham will be looking to make it a hat-trick of home victories over their opponents for the first time since November 1998.

Antonio, who has played in four league matches this term, is looking forward to the clash and is confident his side will put in another winning performance against Tottenham.

He told talkSPORT: “We always turn up against Spurs. It’s a massive occasion and we always want to do it for the fans.”

The Hammers are outsiders at 5.50 to pick up all three points, a draw is priced at 4.20 whilst the visitors are 1.60 favourites as they look to put the pressure on the two Manchester clubs leading the way.

Manuel Lanzini resumed training on Thursday after a knee injury but he will not be risked by Bilic whilst Pedro Obiang picked up a knock against West Brom last weekend and will also be missing.

Defender James Collins is the only other absentee with an ankle problem.