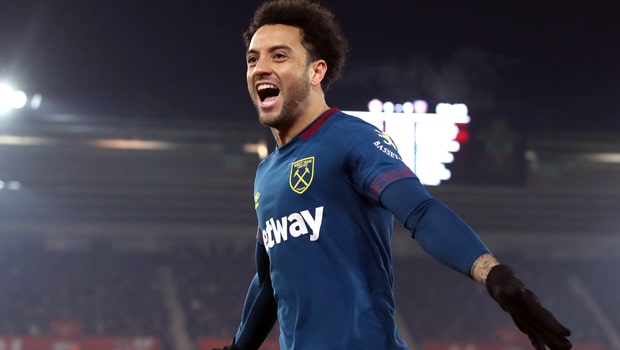 West Ham boss Manuel Pellegrini says there is still room for improvement from Felipe Anderson despite scoring twice against Southampton.

On Thursday night, the Hammers had to come from a goal down to beat Ralph Hasenhuttl’s side and extend their own good run of form, having now won five of their last six games.

Anderson found a quick-fire equaliser following Nathan Redmond’s scruffy opener, by firing a ferocious effort at the edge of the box past the stricken Alex McCarthy.

The winner came from a devastating counter attack after a Southampton corner with Michail Antonio carrying the ball forward before finding the Brazilian who finished well.

After a slow start to the season, Anderson now has seven goals in his last appearances, with the former Lazio man beginning to repay the £40million spent to buy him from Serie A.

However, Pellegrini wants to keep the 25-year-old Brazilian’s feet on the ground and says he still has areas of weakness in his game.

“He loses too many balls – he will continue improving,” said Pellegrini.

“He must understand the Premier League is difficult if you keep the ball at your feet. He is a different player, a player that in every game makes important plays.

“His run of goals is important for him and the team. It’s not easy for a midfield player to score so many goals by this stage of the season. He can change the score of the game in any moment.”

The Hammers next play on Sunday when the go to Turf Moor to face Burnley and are 2.25 to win that game with Burnley 3.25 and the draw at 3.40.