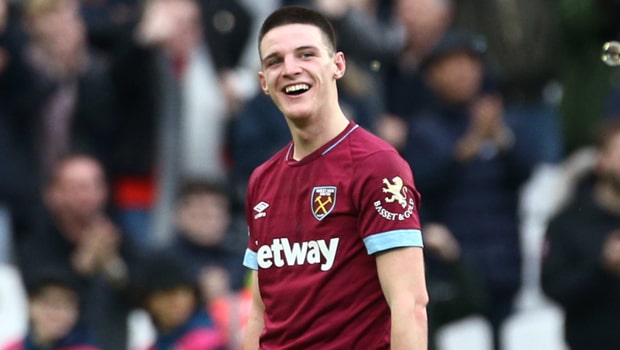 West Ham manager Manuel Pellegrini has sung the praises of Declan Rice and feels the midfielder is ready to feature for England.

The 20-year-old graduated from West Ham’s academy to make his Premier League debut from the bench at the end of the 2016-17 season.

He has been crucial to West Ham’s success, with some commanding performances in midfield this season, and recently committed his international future to England.

After playing three friendlies for the Republic of Ireland, Rice made the bold decision to switch allegiance in the hope of forcing his way into Gareth Southgate’s plans.

The midfielder, who has also played in defence, could be rewarded with a call-up when Southgate names his squad for the Euro 2020 qualifiers with Czech Republic and Montenegro next month.

“We are just starting the development of him as a player, but in this moment his performances are better than every holding midfielder that they have in the other teams.

“Maybe there are foreign players in big teams like Fernandinho that are also [very good]. But we are just starting to see what Declan will be in the future.”

Rice will have the opportunity to further enhance his reputation when West Ham return to action in the Premier League against Fulham on Friday.

The Hammers can be backed at 1.83 to pick up all three points at the London Stadium. Struggling Fulham are priced at 4.20 to come out on top and the draw is available at 3.80.