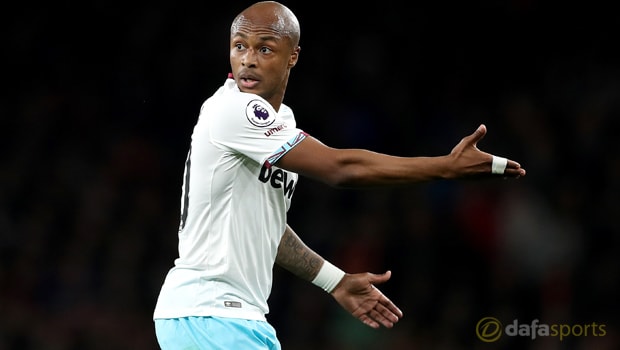 West Ham forward Andre Ayew believes the squad can solve their problem of dropping points from winning positions before the end of the current campaign.

The Hammers have endured a tough season after moving to the London Stadium from their former home at Upton Park over the summer.

Slaven Bilic’s men had to show some resolve midway through the term to pull away from a relegation battle and they now sit comfortably nine points clear of the bottom three in 13th with five games left to play.

However, they had the chance to move even further up the table on Saturday when they travelled to take on rock-bottom Sunderland, who are priced at 1.01 to be relegated, at the Stadium of Light.

West Ham led twice in the north east but were pegged back on both occasions as they had to settle for a 2-2 draw.

The east London outfit have now dropped 22 points from winning positions this season, the highest of any side in the division, and Ayew admits that needs to change.

The former Swansea man insists the squad is feeling confident and expects they can address the situation before the end of the 2016-17 campaign.

Ayew told West Ham’s official website “I’m confident at the moment and confident for my teammates too.

“It wasn’t a bad game from us collectively but we’re disappointed to have not taken the three points.

“It was a tough game and we’re disappointed to concede in the last minute. That’s happened a few times now but we’re ready to prepare for Everton and that’s going to be a tough game.

“I think this season has been difficult season in many ways. We just need to work hard to gain confidence and when we’re leading, we went back too much and don’t go forward.

It happens when you haven’t got the results you have wanted. “I know we will solve this problem before the end of the season.”