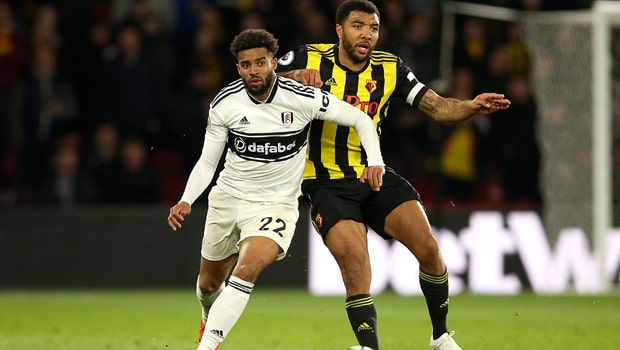 Watford striker Troy Deeney admits he is not overly excited by Sunday’s FA Cup semi-final against Wolves but sees it as a stepping stone to further success.

The Hornets have enjoyed a superb campaign to date, with 13 wins and seven draws seeing them sit eighth in the Premier League standings, just one point adrift of Wolves in seventh.

They beat Fulham 4-1 on Tuesday to send the Cottagers down to the Championship, with Deeney netting his ninth top-flight goal of the season at Vicarage Road.

Next up for the Hertfordshire outfit is a trip to Wembley this weekend to take on Nuno Espirito Santo’s men for a place in the FA Cup final but it seems as though Deeney is non-plussed by the prospect.

“I wouldn’t say it’s the biggest game of my career, it’s probably the biggest opportunity in terms of making a legacy at this club,” he told the Observer.

“We’re still fighting for seventh in the league and obviously the opportunity to go into the FA Cup final so I wouldn’t say it’s the biggest game.”

Either Manchester City or Brighton will be waiting in the final, with City 1.13 to win that match and the Seagulls on offer at 21.00.

Watford are priced at 3.10 to down Wolves while the West Midlanders can be backed at 2.38 but Deeney is not just looking at it as one big match but has an eye on the future.

“Where we’re aspiring to get to and where Wolves are trying to aspire to get to is to be in this sort of situation more regularly, so we don’t see it as a one off, we see it as the building blocks to do more,” he added.