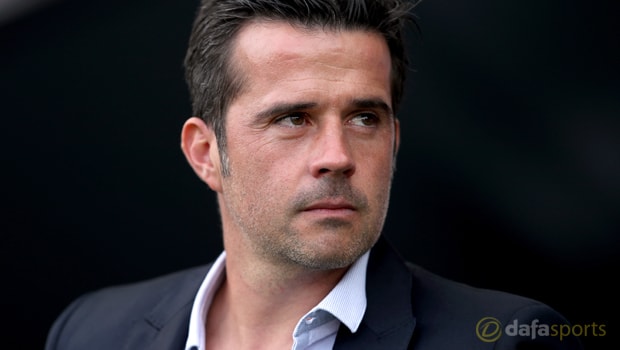 Watford boss Marco Silva has remained tight-lipped regarding his future at the club despite speculation linking him with the vacant managerial position at Everton.

Portuguese ace Silva appears to have emerged as the Toffees’ number one choice to succeed Ronald Koeman as the permanent manager at Goodison Park, but Watford are standing firm in their desire to keep hold of their boss.

Watford have already reportedly turned down at least one approach from Everton for Silva’s services and the former Hull boss was in the dug-out for the Hornets’ 2-0 victory over West Ham in the Premier League on Sunday.

Speaking after that match Silva reaffirmed his commitment to Watford, although he stopped short of ruling out a move to their top-flight rivals.

“What I can control and what is in my hands is the next training session and we will be back in tomorrow,” Silva said.

“I know the speculation and people ask questions of our commitment, but me and my players gave a very good answer about our commitment.

“This type of interest in players and coaches happens but it’s not fair to question our commitment.

I’m not going to talk about that situation any more.” Silva has certainly been a success since taking over the reins at Watford during the summer, as Sunday’s win saw them move up to eighth in the league standings, just five points off the Champions League positions.

The Watford hierarchy will be hoping Silva is still in charge for their next match, a trip to St James’ Park to take on Newcastle on Saturday.

The Hertfordshire outfit are priced at 3.40 to win that match, while Newcastle are available at 2.20 and the draw is on offer at 3.30.