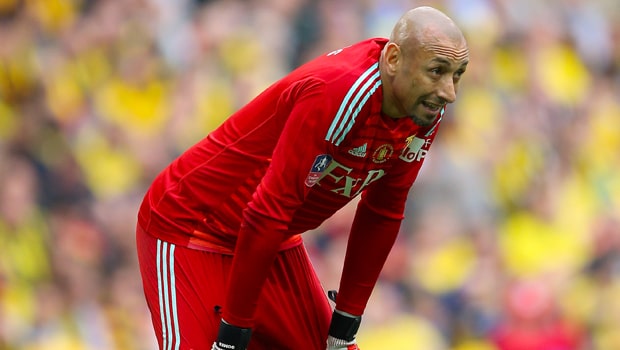 Heurelho Gomes will take some time to consider his next move before deciding on his retirement from professional football.

The 38-year-old Brazilian goalkeeper endured a disappointing afternoon at Wembley on Saturday as Watford’s hopes of a first major domestic honour went up in smoke during a 6-0 defeat to Manchester City in the FA Cup final.

Gomes was blameless in the loss and, in truth, was key in ensuring his side didn’t suffer even further.

The former Tottenham goalkeeper had suggested in March that he ’99 per-cent’ sure of retiring this summer but in the run up to final Hornets boss Javi Gracia suggested it was no certainty Gomes would play his final game at Wembley.

Afterwards the veteran stopper suggested he’s considering playing on, with Watford keen to have him for another season as understudy to Ben Foster. Asked if he had made a final decision, Gomes said: “No, not yet.

“I have got to speak to the club and the club want to speak with me, so I will listen to them and see what is going to happen.

“If I am still able to do something for this club I will do it. But we need to speak, calm down and sit next week and see what the decision is.”

Despite being on the end of a drubbing from Pep Guardiola’s star-studded side, Gomes felt there was plenty for Watford to be proud of.

“Of course the result is hard to take but we lost to the best team in the league and probably the best in the world, so I am so proud of these players, so proud of this club and the supporters,” he said.

“You could see that they are proud of us as well, they sing until the last minute. We need to keep going and yeah, we go again.”

Gomes’ former side Spurs are 3.80 to win the Champions League final against Liverpool on June 1. The Reds are 2.00 while the draw is 3.40.