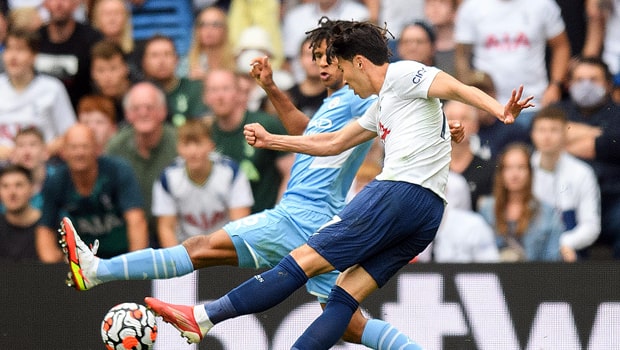 Tottenham started the 2021/2022 Premier League season with an impressive 1-0 win over Premier League champions Manchester City at the White Hart Lane on Sunday.

Despite not having troubled striker Harry Kane amidst reports of a potential transfer to Manchester City, the Spurs held Pep Guardiola’s side who had Ferran Torres as Center forward for the first 45 minutes of the game.

However, the winning goal came early in the second half through South Korean forward Son Heung-Min who smashed home from Steven Bergwijn in the 55th minute of the game.

Pep Guardiola started £100m signing from Aston Villa, Jack Grealish, but the English Midfielder could not do anything to salvage a point for the Cityzens.

It is manager Nuno Espirito Santo’s first Premier League win as the manager of Tottenham after joining the team after the end of last season.

Meanwhile, Arsenal kick-started the season with a 2-0 loss to newly-promoted Brentford on Friday, the Gunners were without Strikers Alex Lacazette and Aubameyang.

European champions Chelsea started their premier league campaign with a comfortable 3-0 win over Crystal Palace. Marcos Alonso, Christian Pulisic, and Nathaniel Chaloba were all on the scoresheet for Thomas Tuchel’s side.

For Manchester United got a 5-1 win over Leeds United with Bruno Fernandes scoring a hat-trick while Fred and Greenwood also got on the scoresheet.

West Ham United came from a goal down to defeat Newcastle United 4-2 on Sunday afternoon. The Hammers fell behind twice in the first half before Benrahma, Soucek, and Antonio got all three points for West Ham United.