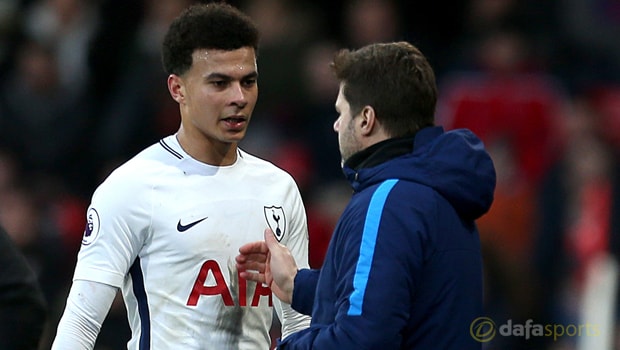 Tottenham coach Mauricio Pochettino was quick to praise midfielder Dele Alli after he responded from his England snub by scoring twice in the 3-1 win at Chelsea.

The playmaker only played 22 minutes for the Three Lions during the international break as Raheem Sterling got the nod behind the striker during the games against the Netherlands and Italy.

However, the 28-year-old was back in action on Sunday and impressed at Stamford Bridge. Alvaro Morata put Chelsea in front before Christian Eriksen’s drilled effort levelled matters.

Alli then scored twice away from home in what was his 100th Premier League appearance.

Spurs now have an eight-point advantage over Chelsea in the race for the top four, with seven matches to play, and Pochettino was delighted with Alli’s contribution.

When asked about his England situation, Pochettino told reporters: “Dele would not have been affected. He is so strong.

We need to tell him that if he wants to compete with the national team and try to win the trust and confidence of the manager then he needs to do the things he did today.

“Younger players sometimes need to breathe, there’s a lot of pressure to shoulder, he had nothing to show to me, or Tottenham, it’s more about the expectation, which is sometimes so high.

I’m very happy for him because he played very well.

“I remember four years ago when I arrived at Tottenham our challenge was to bridge the top four and now we’re competing with the top sides.

“We’re achieving many great things with our philosophy and we’re proud with how we’re playing.”

Alli will be expected to feature at this summer’s World Cup and England are 17.00 to win the tournament.