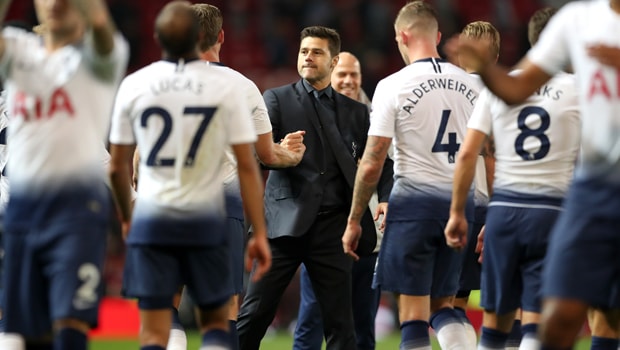 Mauricio Pochettino has called for Tottenham to remain calm despite admitting their 3-0 triumph over Manchester United on Monday was a ‘massive victory’.

Spurs had reason to be pessimistic heading into the match, having lost 21 of their 26 previous Premier League visits to Old Trafford, while they had even failed to score on each of their last four trips to the venue.

That all changed, however, when Harry Kane headed home the opener on Monday night, before a brace from Lucas Moura sealed the victory and see Spurs maintain their perfect start to the new season.

Pochettino is under no illusions just what an impressive victory it was, but he knows it is too early in the season for it to be considered a ‘decisive’ result and he has instead urged his side to remain grounded.

“It’s only three points but after four years playing here without scoring one goal and all that was negative for us, 3-0 away from home at Old Trafford is a massive, massive victory,” the Argentine told Sky Sports.

“I said from the beginning, this is not decisive. Of course, this will provide us with a lot of confidence, and trust in how we are working. But we know that it’s too far away, the end of the season.

“We need to keep pushing, try to be consistent throughout the season. We’ve started really well with three games and three victories. We must keep calm and work hard, that’s the most important thing.”

It is only the fifth time in their history that Spurs have started a top-flight season with three consecutive victories and they are priced at 12.00 to go on and win the title this term.

Next up for Pochettino’s men is a trip to Vicarage Road on Sunday to take on a Watford side that have also made an impeccable start to the new season.