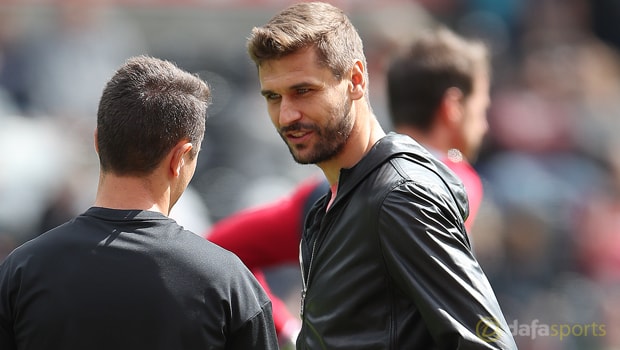 Fernando Llorente completed his move to Tottenham from Swansea on deadline day and he expects his new employers to challenge for titles over the coming years.

The Spain international has moved to Spurs for an undisclosed fee, believed to be in the region of £12.1million, and he has signed a two-year contract with Mauricio Pochettino’s side.

The 32-year-old, who is currently sidelined with a broken arm, will be hoping to replicate the kind of form he showed whilst at Swansea last season, as his 15 Premier League goals played a major part in the Welsh club surviving in the top flight.

Llorente is confident he can be a major asset for Spurs and he believes the club have proven over recent seasons that they are capable of challenging for major honours on all fronts.

“I can only say that I come here to help Tottenham to win titles. I think they are working very, very good in the last years.”

The experienced forward will turn 33 in February, but he insists he is still learning and he is looking forward to developing his talents alongside fellow forward Harry Kane and boss Pochettino.

“I think I can learn a lot of things off Harry (Kane) and all the players.

“I can learn with (Mauricio) Pochettino a lot and I am going to do my best here.

I think I can do more things in my career and my dream is to do that here at Tottenham.”

Spurs have only collected four points from their opening three matches of the new Premier League season, but they are priced at 13.00 to claim their first top-flight title in over 50 years this term.