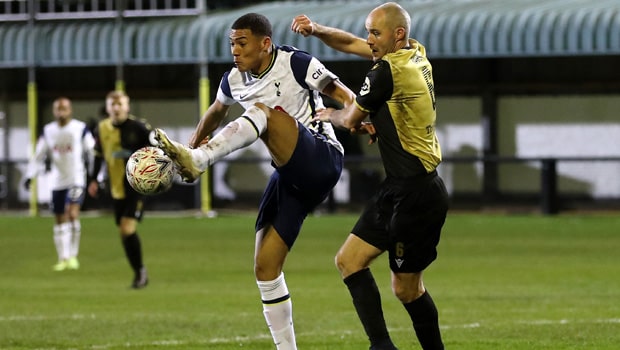 Spurs Brazilian forward, Carlos Vinicius scored a Hattrick as the London side got a 5-0 victory over Marine FC in the FA Cup.

Four first-half goals from Jose Mourinho’s side had made the direction of the game certain before 16-year-old Alfie Devine became Tottenham’s youngest player and Youngest goalscorer ever with his 60th-minute goal.

The English youngster came into the game as a half-time substitute. He was signed from Wigan on July 2020 and was a former Liverpool academy player.

Carlos Vinicius scored three goals in 13 minutes in the first-half while Lucas also scored in the 32nd minute as the North London club eased into the next round of the competition.

He is the first player since Frank Lampard for Chelsea against Macclesfield in January 2007, to score a hattrick under Jose Mourinho.

Spurs are back in action on Wednesday at Aston Villa in the Premier League.

In other matches in the FA Cup, Leeds United was knocked out by Fourth tier side Crawley Town with a 3-0 loss.

After a goalless first half, three second-half goals in the first 25 minutes of the second half secured the win for Crawley in the biggest upset of the FA Cup this weekend.

First-half goals from Manchester City secured a 3-0 victory over Birmingham City in the FA Cup. Phil Foden and a brace from Bernardo Silva secured the win for Pep Guardiola’s side.

Everton and Arsenal needed extra times to defeat their opponents, Rotherham and Newcastle. After a 1-1 draw in regular time, Abdoulaye Doucoure scored in extra time to secure the win for the Toffees.