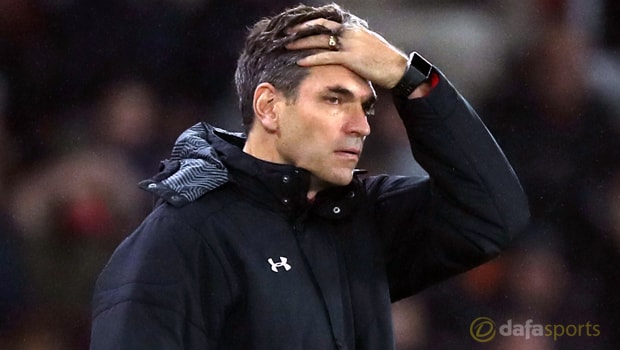 Southampton have sacked boss Mauricio Pellegrino with the club sitting just a point and place above the Premier League relegation zone.

The Argentine succeeded Claude Puel in the Saints dugout last summer, but he never looked fully at home in the role, while a run of one win in 17 league games has left the south coast club in real danger of being relegated from the top flight.

Saturday’s 3-0 away defeat against fellow strugglers Newcastle proved to be the final straw for the Southampton board, who confirmed in a statement on Monday night that Pellegrino, as well as his assistants, Carlos Compagnucci and Xavier Tamarit, have been relieved of their duties.

“The club can confirm it has parted company with Mauricio Pellegrino,” a Saints statement read.

“We would like to place on record our thanks to Mauricio, Carlos and Xavier for their efforts during their time with Southampton, and wish them well for the future.”

The Saints also confirmed that they were hoping to appoint a new manager as soon as possible, particularly given there are only eight rounds of fixtures remaining in the top-flight campaign.

The statement continued: “The club will look to appoint a new management team as soon as possible, with the search for a replacement already underway.”

Mark Hughes, Marco Silva and Thomas Tuchel are among the early frontrunners to take over at St Mary’s, although it is not yet known whether a new manager will be in place ahead of Sunday’s FA Cup quarter-final clash with Wigan.

Southampton are priced at 2.20 to beat their League One opponents at the DW Stadium, while Wigan are available at 3.40 and the draw is on offer at 3.30.