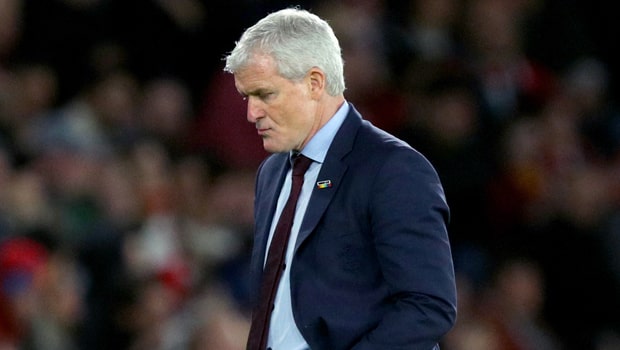 Southampton have sacked manager Mark Hughes following a 10-match winless run in the Premier League that leaves the club inside the relegation zone.

Former Stoke boss Hughes was only appointed as manager at St Mary’s Stadium back in March on a deal that initially ran until the end of last season, but, after he successfully preserved the Saints’ top-flight status, he was handed a three-year contract during the summer.

However, things have not gone well for Hughes or Southampton this season, as they have only won one of their 14 league games to date and they currently sit 18th in the standings, a point adrift of safety.

Hughes’ final match in charge was Saturday’s 2-2 home draw with Manchester United – a game where they were leading 2-0 – and he leaves the south-coast club having won just five of his 27 matches in charge across all competitions.

Saints confirmed the news of Hughes’ sacking in a statement on Monday, while it was also announced that coaches Mark Bowen and Eddie Niedzwiecki will be following the 55-year-old out of the door.

A Southampton club statement read: “We would like to express our thanks to Mark and his staff for all of their efforts during their time at St Mary’s.

“The search for a new manager to take the club forward is already under way.”

Assistant coach Kelvin Davis, who spent a decade as a goalkeeper with Southampton, will take temporary charge of first-team affairs and will be in the dugout for Wednesday’s trip to Wembley to take on Tottenham.

Southampton are priced at 8.00 to win that match, while Spurs, who lost the north London derby against Arsenal at the weekend, are available at 1.40 and the draw is on offer at 4.75.