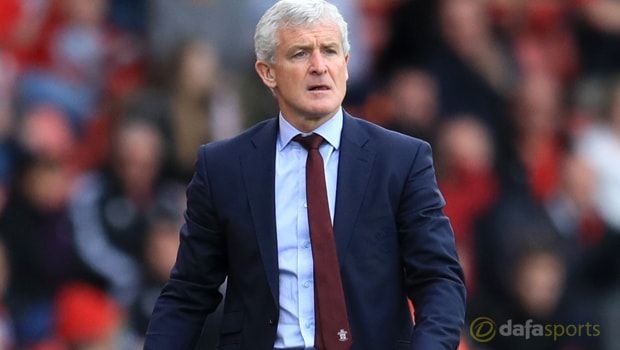 Southampton manager Mark Hughes has urged his side to take all three points at Everton on Saturday as they bid to put the pressure on their relegation rivals.

Saints would move out of the bottom three with a victory in the late kick off at Goodison Park on Sunday as Huddersfield, who are three points above Hughes’ men with an inferior goal difference, are not in action until Sunday.

Southampton picked up a morale boosting 2-1 derby win over Bournemouth last weekend and Hughes hopes they can build on that momentum when they head to Everton.

The Saints boss feels if Saints can pick up a victory at Everton it will serve as a psychological blow to their rivals.

“I talked about that after the Bournemouth game,” Hughes told the club website.

“It was really important we won that first one. If you looked at it, we had four games left and we had to get the first part of it done right, which we were able to do.

“It’s only one quarter really of what we have to do and what’s ahead of us, but that reality of winning those three points has put pressure on others.

“You see the tone of the media reports on our game and it’s all about maybe teams around Southampton are now looking over their shoulder, and that’s what we wanted to do.

“We wanted to have maximum points and get a little more pressure on those teams above us.

“We’ve been able to do that and, if we can back it up with another three points at the weekend, that’s a huge amount of pressure on teams that maybe haven’t got the momentum we have.”