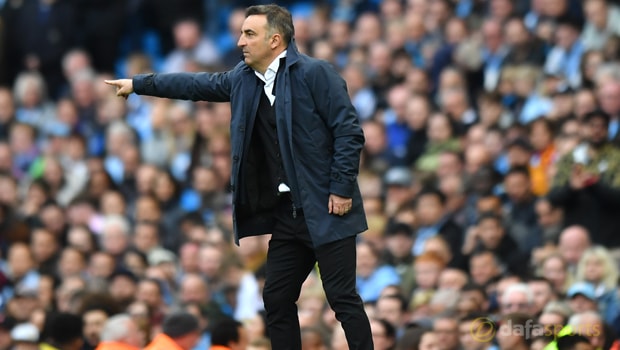 Swansea manager Carlos Carvalhal is convinced his side will not crumble under the pressure of being in a relegation battle.

The Swans are just one place and one point above the drop zone after last week’s loss to Chelsea but Carvalhal has backed his squad to respond when they head to Bournemouth on Saturday.

“Why are we confident? Because we had a very difficult game against Chelsea last weekend where we played face to face against a team with lots of quality.

“We conceded after four minutes. After that a team in our situation, against a team with great ability on the counter-attack, can be disturbed if we are not mentally strong enough.

“But my team dealt very well with the situation. Our mentality was not disturbed.

“We kept competing and we deserved something from the game. We can take confidence from that going into Bournemouth.”

Swansea complete the campaign with home games against Southampton and Stoke – the two sides immediately below them in the table.

Carvalhal feels his side are well placed to avoid the drop as they are in control of their own destiny but he isn’t looking beyond the trip to Bournemouth.

“We are completely focused on ourselves because we know this is in our hands,” he added.

“We have natural pressure, of course, but it’s not pressure that will disturb us. It is positive pressure which will make us work.

“It’s not easy to go away to play Bournemouth, but we will fight for three points, that’s absolutely sure.” Swansea are 3.40 to win at Bournemouth and 3.75 to be relegated.