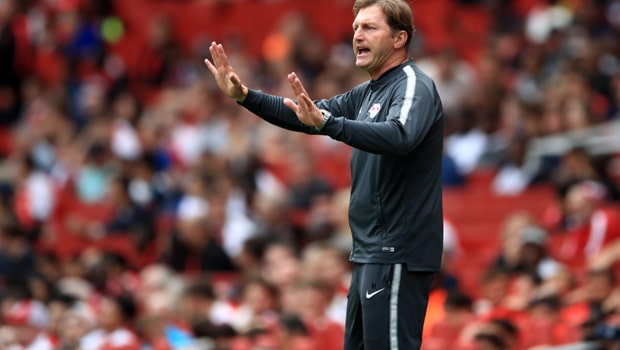 Ralph Hasenhuttl wants to establish his own identity in English football after being named Southampton boss.

The Austrian was confirmed as Mark Hughes’ successor on a two-and-a-half-year contract at St Mary’s.

The former RB Leipzig coach admits he’s a fan of Jurgen Klopp’s work and, having plied his trade in the Bundesliga, he has been dubbed the ‘Klopp of the Alps’ in the past. He says he would prefer to establish his own identity in England.

“I was always a fan of his football, a very proactive way to play, he set marks in Germany with his football. That really influenced my style.”

Southampton have watched three managers come and go in 18 months and are in the relegation zone with the midway point in the season fast approaching.

Hasenhuttl was overseeing Champions League football with Leipzig a year ago, but he is up for a new challenge now on the south coast.

“It’s a big challenge but also the logical next step in my career,” said Hasenhuttl. “My goal is to get my name known here in the Premier League.

“When I left Leipzig I was thinking about my next step, and I want to stand in front of a new team, new language, to get developed personally and in my view of football, that’s why I made the decision to come to Southampton.”

Meanwhile the Saints coach says he won’t be relying heavily on the January transfer window to turn the season around, as there is no assurance that spending money will achieve that goal.

“If you want guarantees you have to buy a washing machine,” he said. Southampton are 13.00 to finish bottom of the Premier League this season and 3.75 to be relegated.