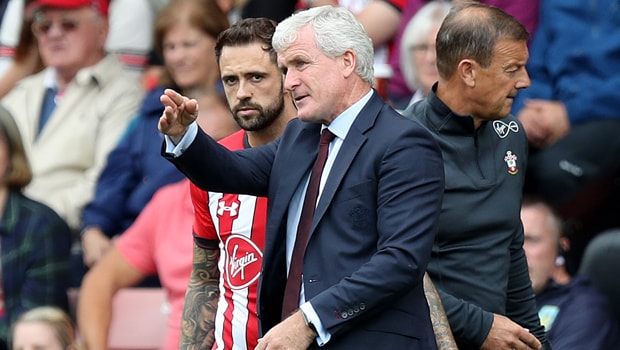 Mark Hughes couldn’t be happier with the array of attacking options now at his disposal at Southampton.

The Saints added Danny Ings from Liverpool last week on transfer deadline day, with Hughes suggesting the 26-year-old was ‘welcomed with open arms’ by his new club.

Ings has struggled with knee injuries in recent years but the England-capped forward believes Saints’ style of play will suit him after being released from Merseyside to pursue first-team football.

He made his first Southampton appearance as a sub in Saturday’s stalemate with another former club, Burnley, at St Mary’s.

They have been held scoreless there, but Hughes is adamant he’s got the right mix of attacking talent for successful campaign ahead, and adding Ings was key to that.

Ings is set to compete with Charlie Austin, Shane Long and Manolo Gabbiadini for game time.

“When strikers walk in the building, it excites players, fans and the media. It is always big news,” he told reporters.

“Danny came from a big club where things went against him in terms of injuries and trying to force himself into a very good team.

“I like the fact that all my strikers have got different traits. That means individually they have different things they can bring to the party.

“With the options I have, I can pose different problems to different teams. The combinations I can put together are really interesting.”

Southampton take on Everton on Saturday and are 4.20 to take three points on Merseyside. The Toffees are 1.85 to win while the draw is 3.50.