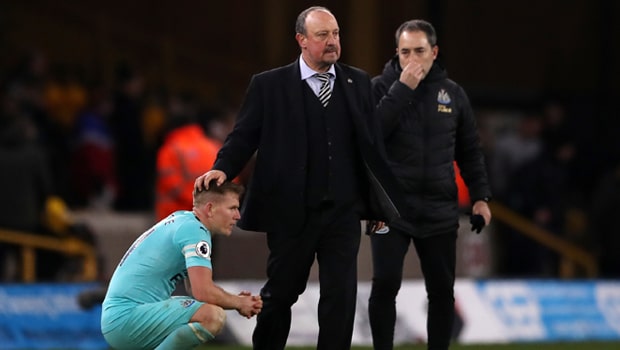 Newcastle United manager Rafael Benitez could not hide his contempt after watching his team concede a controversial late equaliser in their 1-1 draw with Wolves.

The Magpies led through a second-half strike from Isaac Hayden at Molineux, only to be denied a precious win when Willy Boly’s injury-time header from close range restored parity.

It was the second time this season Wolves had stung Newcastle late, with Matt Doherty getting a winner at St James’ Park in December.

Benitez had cause to feel hard done by on two counts after Wolves defender Boly challenged goalkeeper Martin Dubravka for Adama Traore’s looping cross before nodding in from a yard out, while the goal also came after the indicated four minutes of stoppage time had elapsed.

The experienced coach was less concerned about the timing, however, and much more so about the nature of the challenge on his goalkeeper.

“In England they don’t understand the rules. I can say many things but it will not change anything,” he said.

“I didn’t like the challenge at the end. You have to protect the keeper. We have been here for years and it’s still very difficult to explain that.”

Newcastle have picked up seven points from their last four games and also gave a second-half debut to Miguel Almiron after his £20m move from Atlanta in January.

They may be just a single point clear of the relegation zone in 16th but the Newcastle boss was still determined to see the positives.

“I’m happy with the performance of the team, we were controlling but it’s not easy. I’m happy with a lot of things but disappointed with how we conceded,” he added.

“The disappointment is for everyone.” Newcastle are 7.00 to be relegated this season.