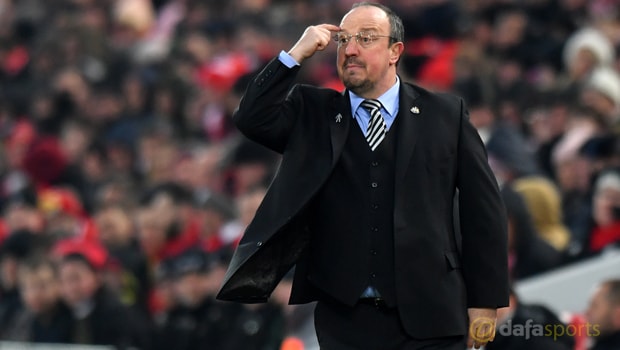 Newcastle United manager Rafael Benitez says the next two matches against Southampton and Huddersfield will be defining moments in the club’s battle against Premier League relegation.

The Magpies made the trip to Anfield on Saturday night to take on an in-form Liverpool side and, although the visitors frustrated the hosts for over half an hour, the Reds had too much in the end.

Egypt international Mohamed Salah scored his 32nd goal of the season in the 40th minute before Sadio Mane netted 10 minutes after the break, securing a comfortable 2-0 victory for Jurgen Klopp’s men.

Newcastle have dropped to 16th in the table and remain just two points above the bottom three ahead of two crucial relegation six-pointers against Southampton and Huddersfield.

Both of those clashes will take place at St James’ Park and Benitez will be hoping January loan signing Islam Slimani has recovered from a groin issue in time for those encounters.

The Spanish tactician, who suffered his first loss against Liverpool since leaving the club in 2010, admits it is the coming matches against their fellow strugglers which will determine their Premier League future.

“Southampton will be dangerous, they are struggling but they are a very good team, Huddersfield are very dangerous, it doesn’t matter that you are home,” he said.

“It would be a massive achievement for everyone (to survive) because we are still a way from it.

“We need to just concentrate on every game.” Newcastle, who are 5.50 to be relegated, are 2.70 favourites to beat Southampton on Saturday, a draw is priced at 3.25 whilst the Saints, who drew 0-0 with Stoke last time out, are a 2.75 chance.