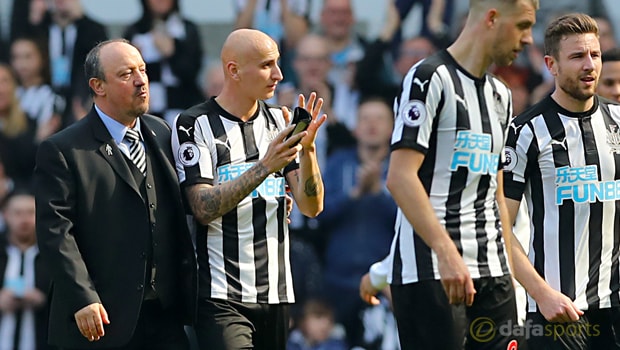 Newcastle manager Rafael Benitez has hinted that he could rotate his starting eleven for Monday’s clash with Everton at Goodison Park.

The Magpies confirmed their stay in the Premier League for another campaign after coming from behind to beat Arsenal 2-1 last weekend. With the pressure off for the final five games of 2017-18 Benitez has the opportunity to rotate his squad and he looks likely to do that on Monday night.

Benitez has made it clear on a number of occasions that he doesn’t feel his squad has enough depth and the remaining games will provide him with the chance to assess his fringe players.

The Spaniard has urged his men to make full use of a rare outing if they are given the nod to feature on Merseyside.

Benitez said: “Now is maybe the time that some players need to prove themselves.

Defender Chancel Mbemba is one of the players without much game-time this term, having not featured in the Premier League in 2018, and Benitez claims he could get a run out in the final few weeks.

He added: “He was training [on Friday] – and training well – but the problem sometimes is, when the team are winning and you already have, in this case, four players in this position, it’s not easy for everyone in these times.

“With five games left maybe he will have a chance. We will see. He’s training well.”