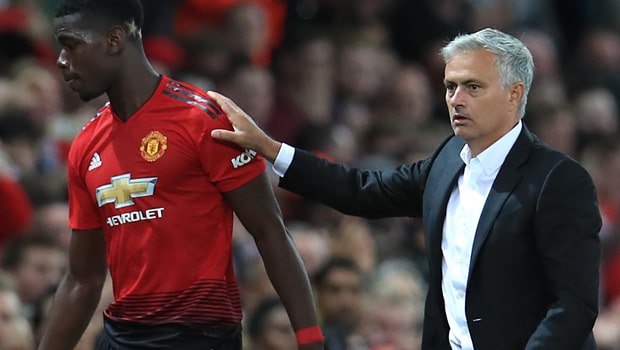 There has been an obvious breakdown in the relationship between Mourinho and the France World Cup winner as his poor form last season saw the midfielder left out of the starting XI on a number of occasions.

However, his inspirational displays for Les Bleus in Russia proved that the former Juventus man still has plenty to offer and the hope was that he would transfer that form to the Red Devils this term.

There have been glimpses of his undoubted talent but he has also gone missing in games – something that saw him chastised by his manager last season.

It seemed as though the situation was resolving itself as the boss recently praised the talented scheme but, on international duty with France, Pogba appears to have inflamed the situation once more when saying: “I’m under contract in Manchester. My future is currently in Manchester, I still have a contract.

“One thing I can assure you, I will always give 100%. No matter which coach I always give everything for United – I cannot say more.”

Nicol feels Pogba’s latest words have made things worse, with the player having his own agenda at the Theatre of Dreams.

“What is he doing? As if there weren’t enough problems at United already,” said the former Reds star.

“Why is a player at United throwing fuel on the fire? Why is he saying that?

“Does he want Mourinho gone? Because that sounds like what he is doing to me.”

United have made a poor start to the season and can be backed at 41.00 to win the title, with rivals Manchester City favourites at 1.60.