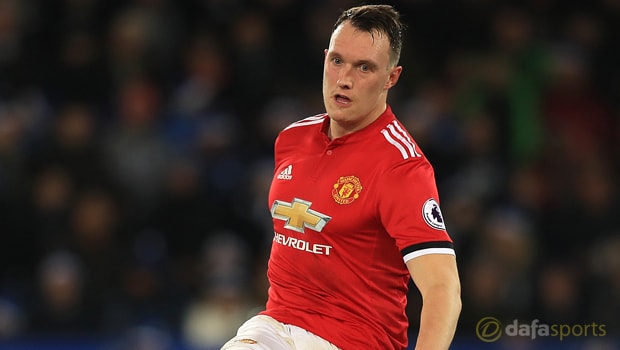 Phil Jones admits Manchester United must focus on securing a top-four finish in the Premier League following their recent run of indifferent results.

The Red Devils had been expected to be Manchester City’s nearest challengers for the title this season, but a run of three consecutive draws has seen them fall 15 points behind their rivals, while Chelsea have leapfrogged them into second in the standings.

Indeed, United are now just three points clear of fourth-placed Liverpool, while Arsenal and Tottenham are also within striking distance of Jose Mourinho’s side.

England international Jones is certainly concerned by the teams below United in the standings and he admits their main priority is to secure a top-four finish come the end of the season.

“For sure [we are],” said the England international told reporters.

“It’s obvious if you look at the table. “But we have to concentrate on ourselves.

It sounds so cliche but we need to look after each other, stick together, which is what we will do, and keep going and keep battling.

United will be looking to return to winning ways when they travel to Goodison Park to take on Everton on New Year’s Day.

The Red Devils are unbeaten in their last six meetings with Everton and they are priced at 1.75 to secure all three points from the contest, while the Toffees are available at 5.25 and the draw is on offer at 3.40.