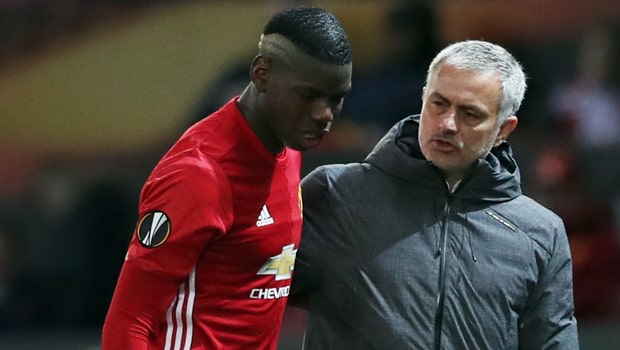 Manchester United boss Jose Mourinho has confirmed Paul Pogba is no longer the club’s vice-captain but he has denied talk that he has fallen out with the France international.

Pogba, who has captained United three times this season in the absence of regular skipper Antonio Valencia, was critical of his side’s defensive style following Saturday’s Premier League draw with Wolves, although he later claimed his comments had been taken out of context.

The 25-year-old was left out of the Red Devils squad for Tuesday night’s shock Carabao Cup defeat to Championship outfit Derby, although he was in attendance as a spectator at Old Trafford.

Mourinho confirmed after their cup defeat that Pogba was no longer United’s vice-captain, although he was quick to dismiss talk of a rift between himself and the former Juventus star.

“The only truth [to the reports] is that I made the decision for Paul not to be the second captain anymore,” Mourinho was quoted as saying by Sky Sports.

“I’m the manager I can make these decisions, no fall out at all, no problems at all. Just a decision I do not have to explain.”

It remains to be seen whether Pogba will return to the United starting line-up for Saturday’s Premier League clash with West Ham at the London Stadium.

United are unbeaten in their last five meetings with the Hammers and they are priced at 1.85 to secure another victory this weekend, while Manuel Pellegrini’s side are available at 4.33 and the draw is on offer at 3.60.