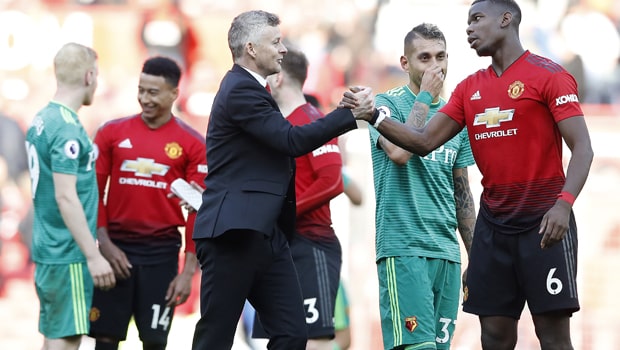 United will be hoping to gain a positive result from the first leg of their quarter-final tie and will take confidence from their dramatic away goals success over Paris Saint-Germain in the previous round.

France international Pogba missed the second leg of the PSG tie through suspension and Solskjaer expects the midfielder to make up for lost time by producing a commanding performance on Wednesday night.

“He’s a Man United player. He’s one of our big performers and on a big stage.

“It’s not about one player, everyone has to perform at their best level and at Paul’s best he can run a game like this, and that’s what you expect from him, that he really puts his stamp on a game like this.”

Speculation continues to surround Pogba’s long-term future at Old Trafford and he was previously linked with a move to Barca last summer.

Real Madrid are also believed to be admirers of the 26-year-old, but Solskjaer has reiterated that he expects the former Juventus star to still be a United player next season.

“He knows the game against PSG was not his greatest moment. So, he is only focused on playing well tomorrow against Barcelona and I cannot see him not playing for Man United next season either,” the Norwegian added.

United are priced at 3.80 to claim a first-leg advantage on Wednesday night, while Barca are available at 2.00 and the draw is on offer at 3.60.