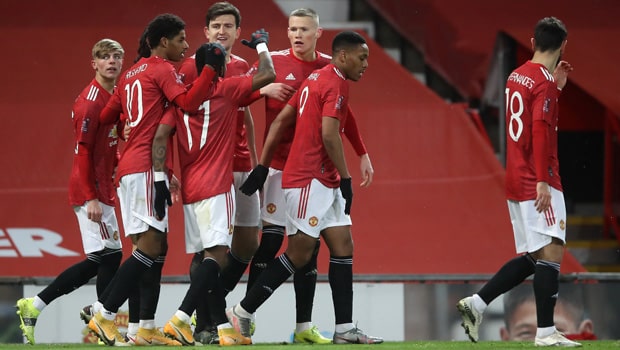 Manchester United Moved into the next round of the English FA Cup after a 1-0 win over West Ham at the Old Trafford on Tuesday evening.

The Red Devils had beaten Liverpool 3-2 in the last round, while West Ham thrashed Doncaster 4-0.

Both teams drew their last games in the Premier League at the weekend. West Ham was held to a goalless draw at the Craven Cottage, while Manchester United was denied all three points after a 3-3 draw with Everton at the Old Trafford.

Ole Gunnar Solskjaer was without Paul Pogba for the game, and he also decided to rest Bruno Fernandes, and Edinson Cavani.

Ivorian teenager Amad Diallo was also on the substitute bench after a goal-laden period with the U23s.

The game started slowly, but the Red Devils dominated the first half although it ended goallessly. The Hammers were toothless in the second half, failing to trouble Dean Henderson who was in goal.

Manchester United had most of the chances but failed to scored in 90 minutes, but the extra time proved more fruitful for the Red Devils as Scott McTominay turned in Marcus Rashford’s assist.

Manchester United will wait for the draws before knowing their next opponents in the next round of the competition.

However, they will face West Brom in the Premier League at the weekend before playing Real Sociedad in the Europa League in Turin, Italy.

The round of 32 tie against the Basque club was moved to Juventus’s home stadium, the Allianz Arena in Turin because of Germany’s ban on travelers from the UK due to the new variant of the COVID-19 virus.

In other FA Cup matches on Tuesday, championship side Bournemouth defeated Burnley 2-0 at the Turf Moor.

On Wednesday, Swansea will host Manchester City, Leicester City will host Brighton, Sheffield United will play Bristol City, and the last game will be between Everton and Tottenham at Goodison Park.