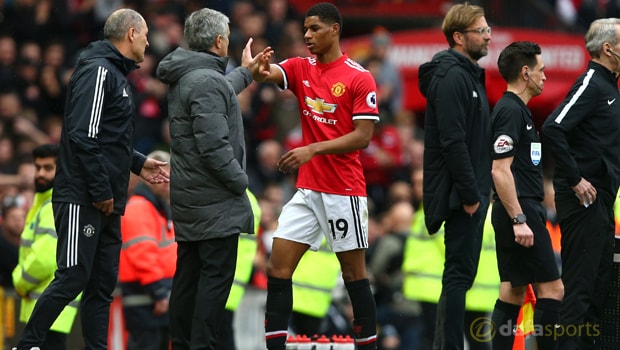 Manchester United striker Marcus Rashford says he is learning a lot under manager Jose Mourinho and insists his lack of game time is not slowing his development.

Rashford has had to play second fiddle in the last couple of months, with the likes of Alexis Sanchez, Anthony Martial, Jesse Lingard and Juan Mata all starting ahead of him.

The 20-year-old started his first Premier League game since Boxing Day on Saturday and he repaid Mourinho as he scored twice in a man-of-the-match display.

He will now be hoping to get a regular run of games ahead of the 2018 World Cup but the youngster insists he is learning plenty off the former Chelsea, Inter and Real Madrid coach.

“Right now, I’m probably not learning the most on the pitch,” Rashford told Sky Sports.

“In training is where I’m doing most of my learning.

“You have to take it into the game and today [Saturday] it worked. Personally, taking the confidence from this game into the next games is important.

“There’s lots of things [I’m learning]. It is just the all-round game is starting to become more clear.

“Things this manager wants are becoming more clear to me. The more you do, the easier the results come on the pitch.”

Rashford could have worked his way into the starting line-up for Tuesday’s Champions League game against Sevilla.