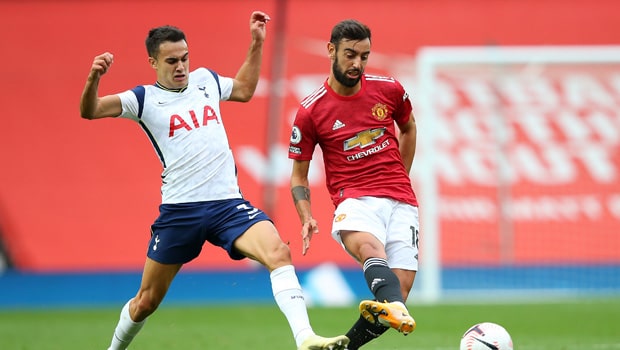 Ten-Man Manchester United on Sunday afternoon were thrashed 6-1 at the Old Trafford by Tottenham Hotspur in an English Premier League game.

The Old Trafford side were not the only team beaten comprehensively as Champions Liverpool were thrashed 7-2 by Aston Villa at the Villa Park.

At the Old Trafford, United took a very early lead when the referee pointed to the spot after just less than 3 minutes into the game.

Bruno Fernandes converted the penalty, but the lead didn’t last for two minutes as Tanguy Ndombele equalised and the Spurs took the lead moments later in the 4th minute through Son Heung-Min’s effort.

Anthony Martial got sent off in the first half in the 28th minute before Harry Kane, and another first-half goal from Son Heung-Min made it 4-1 in the just the first half.

Serge Aurier scored in the 51st minute, and Harry Kane scored a penalty in the 79th minute to round off the scoring.

Later on, on Sunday evening, it was more shocking as Aston Villa trounced Liverpool by 7-2. Jack Grealish and Ollie Watkins combined in the fourth minute to open the scoring.

Ollie Watkins scored his brace in the 22nd minute, John McGinn scored in the 35th minute, and Ollie Watkins completed his hat-trick with just six minutes left in the first half.

Chelsea loanee, Ross Barkley scored in the 55th minute, but Mohamed Salah pulled one back for Liverpool. However, Jack Grealish scored a late brace to compound Jurgen Klopp’s Woes.

Liverpool was without forward Sadio Mane and Allison Becker for the game due to the Senegalese’s coronavirus infection discovered during the week.

In other matches, Arsenal beat Sheffield United 2-0 while Leicester City were beaten 3-0 at home by West Ham while Southampton beat West Brom 1-0.