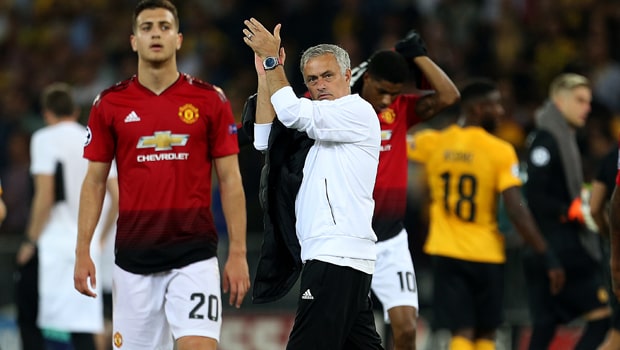 Jose Mourinho has challenged Manchester United to put on a show for their home fans against Wolves on Saturday.

The game will be Man United’s first at home since they were swatted aside 3-0 by Tottenham last month.

The Portuguese heaped praise on the response from the Old Trafford faithful to that chastising loss, and now he wants to his players to repay the faith shown in them by excelling against Wolves.

Mourinho’s team have won all three games away from home since losing to Tottenham, getting Premier League wins at Burnley and Watford before a midweek stroll in the Champions League as they won 3-0 in Switzerland against Young Boys.

The United boss is fully aware that returning to their own patch for the first time since the Tottenham loss is far from insignificant.

“Old Trafford was amazing with us on a defeat and now they are waiting for us after three away matches,” Mourinho told MUTV.

“Three victories away from home where the team showed the character, personality, desire and commitment – we show all of that in these three matches.

“So I think Old Trafford has reasons to be waiting for us with a good feeling against a good opponent.”

Wolves have started their Premier League campaign with just one defeat in their first five matches to sit ninth in the table and Mourinho is respectful of the Midlands side.

“They are an opponent that comes with a feeling of success because they had huge success last season in the Championship,” he said.

“They are doing well in the Premier League so it will be a difficult match for us but I know Old Trafford is going to be behind the boys.”