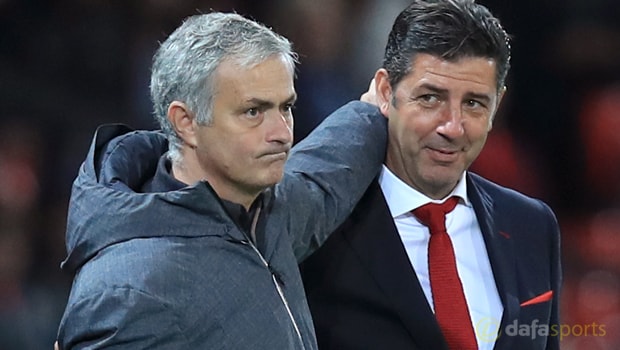 Jose Mourinho insists he is happy with how Manchester United’s Champions League campaign is coming on after seeing his side beat Benfica 2-0 on Tuesday.

The Red Devils continued their perfect Group A record but not without incident, with Anthony Martial seeing a penalty saved by Mile Svilar while the hosts were fortunate to be ahead at the break after Nemanja Matic’s effort hit the post before bouncing in off the goalkeeper’s back.

Despite dominating possession, another penalty was needed for United to seal the victory and prompted plenty of questions.

Striker Romelu Lukaku has been struggling for form in recent weeks but despite grabbing the ball, word came from the bench for Daley Blind to take it and he duly converted.

It may not have been entirely comfortable but Mourinho knows just a single point from his side’s final two group games will see them into the knockout stage, with United 11.00 to win the Champions League.

The 54-year-old has previously ruled Europe with both Porto and Inter Milan and says he is pleased by how his players are performing although he is keen to ensure they do not take their eye off the ball.

“We don’t qualify yet, not yet,” he told the club’s official website.

“I’m more than happy. I’m happy we almost qualified but I’m quite a bit disappointed we are not yet [qualified].

I’m happy after four matches away, then two difficult [home] ones against Tottenham and Benfica and two victories.”

In his side’s next game on Sunday, Mourinho has personal pride at stake when he faces former club Chelsea at Stamford Bridge.