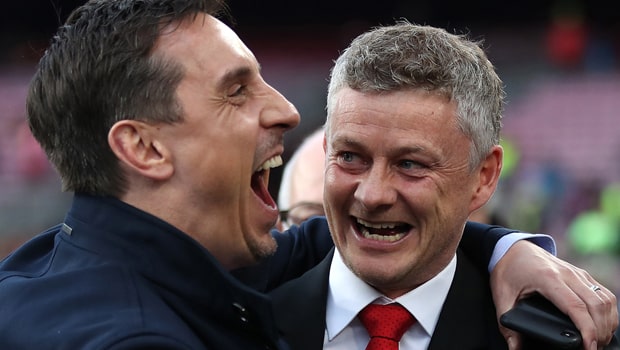 Gary Neville doesn’t feel Manchester United will have any concerns in attracting ‘top-end’ players to Old Trafford this summer.

The Red Devils are once more seeking a rebuild under Ole Gunnar Solskjaer in the off-season. Whilst Neville admits his former club are going through a ‘difficult time’ he is confident that Old Trafford remains an appealing destination.

“I think United can still attract top-end players because we’ve seen good players come to the club over the last six or seven years,” the United great said.

“This club will never move away from being a sensational football club. It will have difficult moments, and it’s having a difficult time.”

Inevitably, the club will miss out on some targets but that is not something new, says Neville. The former full-back says even Sir Alex Ferguson failed to get his man every time.

“[We] Lost (Arjen) Robben to Chelsea in the mid-2000s, we lost (Samir) Nasri to City. Don’t always think that when Alex Ferguson was here it didn’t happen,” Neville added.

“This club lost players when it was successful to some of the biggest clubs in Europe that are competing with United. “Don’t think that if United lose players now to Barcelona that this is the first time it’s ever happened, it’s happened before.

“It’s not because of the current plight, or the coach, or the manager, or the current players, it just happens sometimes. It happened during successful times too.”

Neville has however warned his former side that the days of grabbing talented young British players for cut-price fees are long gone.

“The price is always going to be big because clubs are wise now to it, you can’t pinch players off clubs for £5m or £6m,” he added.