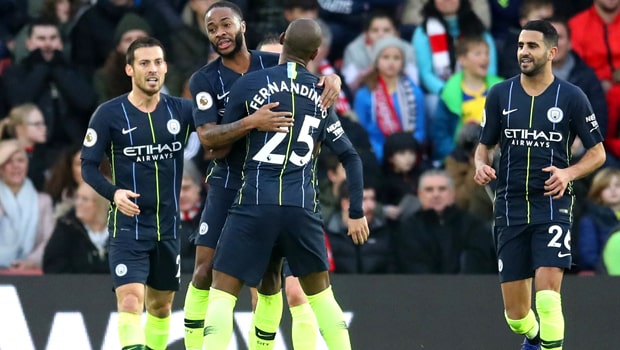 Raheem Sterling says Manchester City ‘can beat anyone’ ahead of their top-of-the-table showdown with Liverpool in the Premier League on Thursday.

The Citizens will head into their opening match of 2019 sitting seven points behind Liverpool in the standings, although they did bounce back from surprise defeats to Crystal Palace and Leicester by winning 3-1 at Southampton last time out.

Liverpool have yet to taste defeat in the top-flight this season and will head to the Etihad Stadium on the back of Saturday’s 5-1 hammering of Arsenal – a result that extended their winning run in the league to nine matches.

City will certainly need to be on the top of their game if they are to secure anything against Jurgen Klopp’s side, but England international Sterling is confident, as he feels the Citizens are capable of beating anyone when they are at their best.

“If we can play the way we know we can play, we can beat anyone,” Sterling told UK newspapers.

“It’s going to be a great game and we’re all looking forward to it.” Sterling is also convinced City are over their recent blip, as he feels Sunday’s win at Southampton has seen them turn the corner. “It’s a massive step and just what we needed,” he added.

“We had two poor games and we knew we needed to win to give ourselves a chance and we did just that. Our previous two results were difficult to take and I thought we bounced back brilliantly.

“I think we owed it to ourselves and as a team to bring that level we know we can bring.”

City are priced at 2.05 to secure all three points on Thursday, while Liverpool are available at 3.50 and the draw is on offer at 3.60.