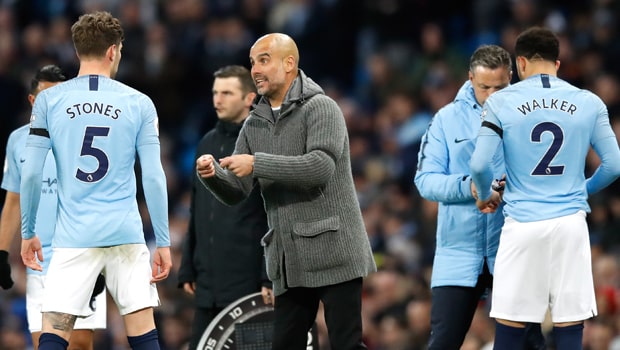 Manager Pep Guardiola feels Manchester City will need to win their six remaining games if they are to lift the Premier League trophy this season.

The Citizens are back on top of the table after a comfortable 2-0 victory over Cardiff at the Etihad Stadium on Wednesday night, with Kevin De Bruyne and Leroy Sane on target in the first half.

The win took City on to 80 points – just one more than Liverpool – and it seems as though the race for the title will go right down to the wire.

Guardiola certainly thinks so and believes that his side will need to be perfect between now and the end of the campaign to defend their title.

“We have the feeling that if we drop points we will not be champions,” he said.

City face Crystal Palace (away), Tottenham (home), Manchester United (away), Burnley (away), Leicester (home) and Brighton (away) in their final six fixtures and are 1.36 to be crowned Premier League champions, with Jurgen Klopp’s Liverpool on offer at 2.88.

Next up is an FA Cup semi-final with Brighton at Wembley on Saturday before the first leg of their Champions League quarter-final against Tottenham at the new Tottenham Hotspur Stadium next Tuesday.

Fixtures will be coming thick and fast if they remain in both competitions and Guardiola admits his men will be ready for a break when they face the Seagulls at the Amex on May 12.

“I don’t know what condition we are going to arrive in,” he added. The Manchester giants are priced at 1.13 to beat Chris Hughton’s side in the cup, with Brighton on offer at 21.00.