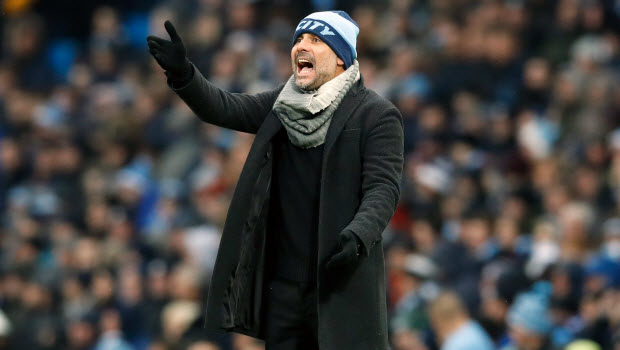 The Citizens cruised past Everton on Saturday with Gabriel Jesus, Leroy Sane and Raheem Sterling all grabbing the headlines at the Etihad Stadium.

Midfielder Kevin De Bruyne returned for his third start of the season but Guardiola had just 15 fit senior players available. The intense fixture list is starting to take its toll on the City squad, with David Silva, Benjamin Mendy, Claudio Bravo and Sergio Aguero all injured.

Despite the fixture pile up, Guardiola is adamant he will name a strong team when his side travel to King Power Stadium. He told Sky Sports: “The problem is we don’t have many players [to choose from].

We have a lot of injured players. Some players who played against [Everton] or the last games have to play [against Leicester]. “Of course it is a chance to reach the semi-final.

Since we are here in Manchester we never dropped one game – not even a friendly game. “A competition must be respected – like we did last season – and we are going to try to win the game.”

Middlesbrough, Burton, Arsenal, Tottenham, Chelsea and Bournemouth all remain in the competition and City are 2.60 favourites to lift the trophy in February 2019.

Chelsea are 3.80, while Leicester are 15.00 outsiders with Dafabet.