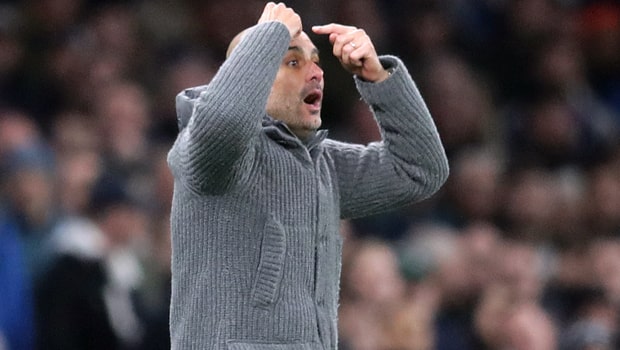 Pep Guardiola feels Manchester City’s 1-0 away loss to Tottenham in the first leg of their Champions League quarter-final tie could actually be a better result than 0-0.

City saw their 14-match unbeaten run across all competitions come crashing to an end on Tuesday as Son Heung-min’s second-half strike was enough to give Spurs a narrow lead to take into next Wednesday’s second leg at the Etihad Stadium.

Sergio Aguero had earlier missed a penalty for City, who failed to grab an away goal, but Guardiola feels a 1-0 defeat could actually be a better result than a goalless draw as it means his side know exactly how they will have to approach the second leg.

“It leaves us in this situation in the second leg, but sometimes 1-0 can be better than 0-0 because you know exactly what you have to do,” he told reporters.

“At 0-0, you think about whether to go attacking or defend, but we know we have to score goals. We’ll be analysing the result, but right now I feel good about how we played – we controlled the game and maybe next week it will work.”

Despite not creating many clear-cut opportunities on the night, Guardiola still felt his side controlled the majority of the match at Tottenham’s new stadium and he remains confident of their chances of progressing.

“If we don’t play well I will say it but I don’t have that feeling,” the 48-year-old added.

“Most of the time, both halves, we were the team with the good build-up, pressing a lot, they couldn’t do that.”

City are priced at 4.00 to go on and win the Champions League this season, but before they can focus on next week’s encounter they must first turn their attention back to the Premier League title race, with an away clash against Crystal Palace to come on Sunday.