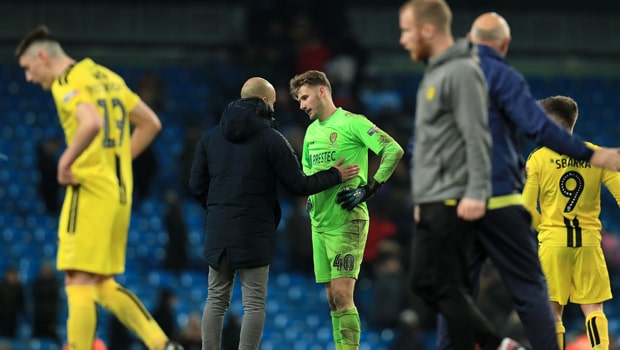 Manchester City manager Pep Guardiola says he isn’t planning to add to his squad in the January transfer window.

The Premier League champions have been tentatively linked with a few players in recent weeks, with reports over the weekend claiming Barcelona forward Ousmane Dembele and Napoli midfielder Allan are targets.

Guardiola refused to categorically rule out any additions but says he expects City to do their transfer business in the summer window rather than in January.

“Sometimes we have done it [signed players in January] but normally when we want to buy a player it’s for the next four, five six years and normally these kind of situations don’t happen in this transfer window,” he said.

“For loan players maybe it can happen, for a short time, but I don’t think the big clubs buy players for just six months and important players are not sold in that period.

“If you have no injuries and you are satisfied, as in our case, with the squad we have, we decided going well, going bad, [we stick] with the same players we started the season.”

City overcame league leaders Liverpool in their last premier League fixture and since then have destroyed Championship club Rotherham in the FA Cup and League One Burton Albion in the EFL Cup, winning 7-0 and 9-0 respectively.

Liverpool opened up a seven-point lead over Guardiola’s men on Saturday with a win at Brighton but City can move to within four points if they beat visitors Wolves on Monday.

Man City are 2.20 to beat Wolves with a -2 handicap and they are 2.25 to win the Premier League outright.