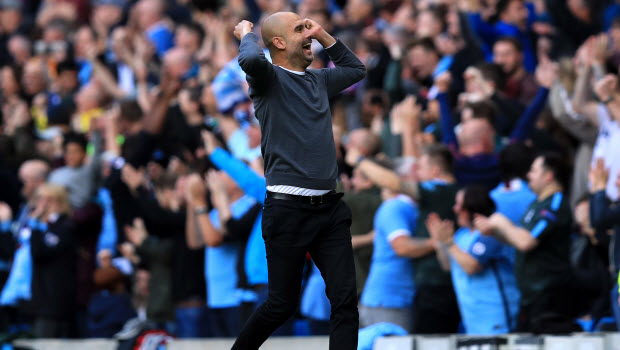 Manager Pep Guardiola hailed Manchester City’s seven-goal demolition of Stoke City at the Etihad Stadium as the best display of his reign so far.

The Citizens romped to a 7-2 win over hapless Stoke, enjoying close to 84 per-cent of possession as they moved the ball around at will.

Kevin de Bruyne was the orchestrator in chief for City, the Belgian delivering a masterclass in attacking play. Gabriel Jesus, Raheem Sterling and David Silva had the host three-up inside half an hour, Sterling’s goal aided by a majestic no-look pass from de Bruyne.

Jesus doubled his tally not long after half-time before Fernandinho, Leroy Sane and Bernardo Silva completed the rout. Stoke, to their immense credit, had briefly rallied either side of the break with goals from Mame Biram Diouf and Kyle Walker putting through his own net.

There was no doubting the attacking supremacy of City however and Guardiola was suitably impressed, especially coming on the back of an international break.

“I am happy for the victory, we had to focus after the international break, to start well,” said the Spaniard. “We didn’t lose easy balls, we play fast and simple.

That’s why I am very pleased. It is the best performance since I came here.” Stoke manager and former City boss Mark Hughes had no complaints after his team were outclassed.

“They were quicker, stronger and anticipated things far quicker than us, and in the end we had no answers to the questions they posed to us,” Hughes said. Manchester City are 1.40 to win the Premier League title this season.