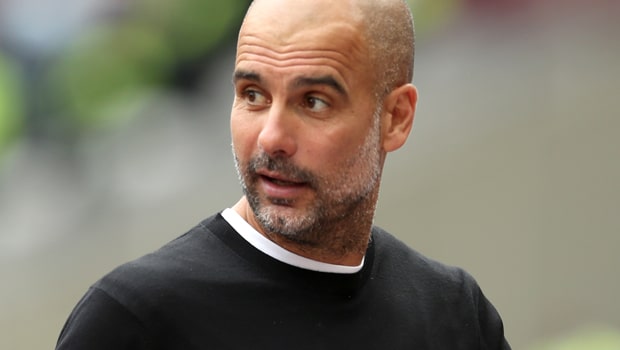 Pep Guardiola says he was far from happy with Manchester City’s first-half display against West Ham, despite going on to win the game 5-0.

The Premier League champions picked up from where they left off last season as they put the Hammers to the sword at the London Stadium. Raheem Sterling helped himself to a hat-trick while Gabriel Jesus and Sergio Aguero were also on target.

The margin of victory could have been even bigger had Jesus not had a goal ruled out for offside via VAR, replays showing Sterling was a matter of millimetres beyond the last defender in the build-up.

With four of City’s five goals coming after the interval, Guardiola admitted he would be looking to improve on plenty of aspects from their first 45 minutes of the Premier League campaign.

“Was it the perfect start? In terms of result, yes. Performance, no!” said Guardiola. “In the first half we were sloppy in our passing. But that’s normal. It’s the first game, away, it was hot, the rhythm was not there.

“The second half was better, more calm, extra passes, and after 3-0 the game was over. I cannot deny I’m so delighted for 5-0.”

Guardiola went on to sing the praises of hat-trick hero Sterling, who recorded 17 goals and 15 assists in the league last season and is 6.50 to pick up the golden boot this term.

The Spaniard says the England international has the talent to succeed either through the middle or out wide and is expecting him to have another big season for City. “I know the special qualities of the player, the consistency, physicality, the finishing,” said Guardiola.

“He is in his first days playing as a striker but for me striker will be an incredible position for him, but he can play in three positions up front.”

City are already top the table and are 1.44 to win the Premier League for a third year running, while Liverpool are 3.80.