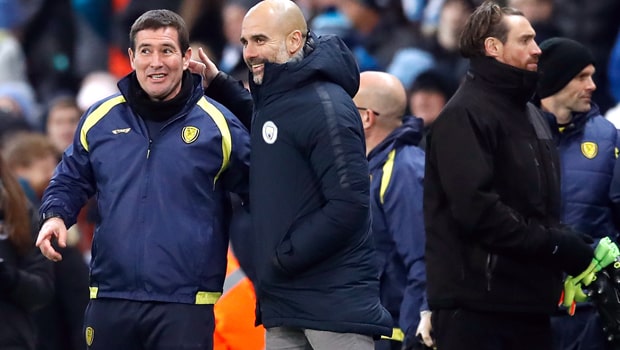 Manchester City boss Pep Guardiola was quick to praise his team as they beat Burton Albion 9-0 in the first leg of their Carabao Cup semi-final at the Etihad Stadium.

The Premier League champions effectively booked their place in the final after a thrilling display in front of their home fans.

Midfielder Kevin De Bruyne started the game as he tries to find his best form after an injury lay-off and he opened the scoring with a header.

Brazil striker Gabriel Jesus then scored the first of his four goals on the night before further efforts from Oleksandr Zinchenko, Phil Foden, Kyle Walker and Riyad Mahrez sealed an emphatic win.

Wednesday’s victory was the first time in more than 31 years that City had scored more than eight goals in a single match and it takes their tally to 16 goals in four days after they hammered Rotherham 7-0 in the FA Cup.

The second leg will take place at Burton’s Pirelli Stadium on January 23, before they could meet Chelsea or Tottenham in the final on February 24.

When asked about his team’s display, the Spaniard told BBC Sport: “The result was good and of course we are already in the final but we have to play the second leg.

We will take it seriously. Burton have had an incredible tournament. They have to be so proud, they did so well.

“Strikers need to score goals, Gabriel Jesus has had chances in the last few games and today he has scored. He is so important.

“It is not easy to play this type of game against a lower team. We made good runs in behind and we took it seriously. After the second and third goal it was easier, we were faster and quicker.”

City remain 1.50 favourites to lift the trophy, while Tottenham are 3.75 to win their first piece of silverware under Mauricio Pochettino.