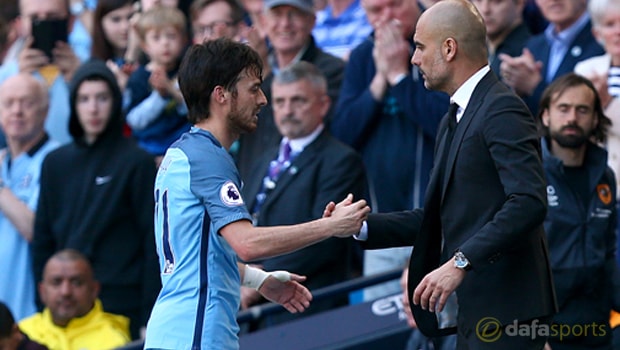 Manchester City manager Pep Guardiola insists midfielder David Silva is a special player but he believes the Spaniard can continue to improve.

Silva made his 300th appearance for the Citizens on Saturday as he helped his side overcome Hull City.

The former Valencia man joined the club in 2010 for £26million and the 31-year-old has gone on to become a crowd favourite.

Guardiola admits he was lucky to work with the likes of Xavi and Andres Iniesta during his time at Barcelona but he has reserved special praise for Silva.

He told reporters: “When I say I’m a lucky guy, it’s because I was with Xavi, Iniesta and now with Silva. All three are outstanding players.

“Silva impresses me every day. To make 300 games is not easy. It’s just a big congratulations to him.

He’s been a big success and hopefully he can play lots more games here in Manchester.

“Hopefully we can make him become a better player. I would like to feel that what he has done is not enough, and he can believe he can do better for his own career.”

The former Bayern Munich coach admits Silva could work on his form in front of goal, after scoring just 49 goals in seven seasons at the Etihad Stadium.

He added: “Always I said he had to score goals because if Silva scores goals he would have been… you cannot imagine because he has absolutely everything: the mentality, a competitor, everything.”

Silva will once again be expected to line up in City’s next game against Southampton, with the Citizens 1.70 to win. The draw is priced at 3.80, while the Saints are available at odds of 4.50.