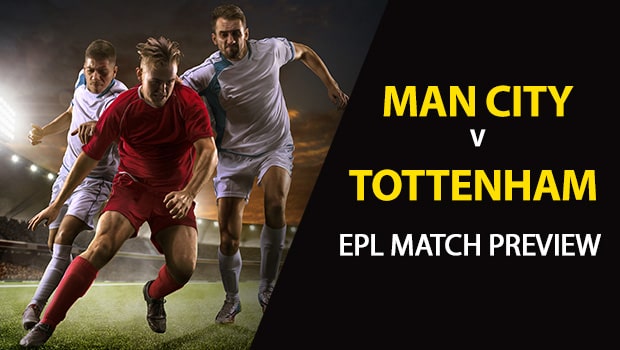 Pep Guardiola and Manchester City will look to continue their dominance following last week’s 5-0 victory over West Ham in east London. Tottenham, following a come-from-behind 3-1 victory vs Aston Villa, will look to carry that momentum into this fixture.

Draw: There’s a about an 18 percent chance this weekend’s match ends in a draw. That happens in 22 percent of AccuScore sims, suggesting some added value on the pick, but not much.

Dominating to Start: Raheem Sterling was an absolute unit in last weekend’s 5-0 win, scoring 3 goals. Gabriel Jesus and Sergio Aguero chipped in with one each.

Can They Do it Again? Tottenham eliminated Manchester City from the Champions League last season. But with Eriksen more than likely on his way out for Tottenham, it’s tough to say they have enough firepower to pull off another upset here.

Head to Head: These two sides last matched up in Premier League action in April 2019 when Manchester City won, 1-0.

For Manchester City, we’ll have our eyes on Raheem Sterling. He has close to a 55 percent chance to score, averaging 2.72 shots overall per sim, 1.64 shots on goal per and 0.79 goals per sim.

There’s a 52 percent chance Tottenham either win, draw or lose this match by just 1 goal. They either win or finish in a draw in 35.7 percent of simulations, and lose the remainder by a margin of 1.23 goals. AccuScore data suggests a more competitive match than offshore books are indicating.