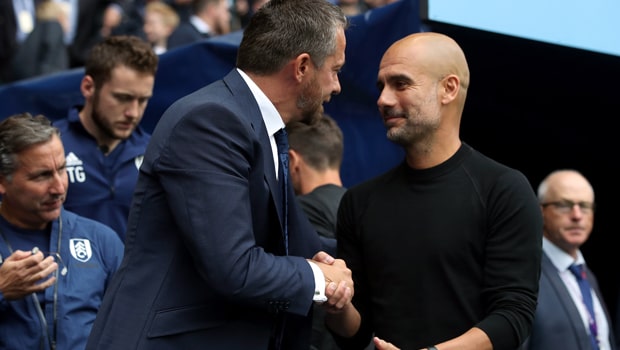 Manchester City coach Pep Guardiola says Fulham have the style of play needed to stay in the Premier League next season following their match on Saturday.

The Cottagers travelled to the Etihad Stadium in good spirits after going unbeaten in three games before the international break.

However, they got off to a terrible start when Leroy Sane fired City in front in the second minute.

Further strikes from David Silva and Raheem Sterling gave Fulham no chance of coming back into the game but Slavisa Jokanovic has been praised by former Barcelona boss Guardiola.

The Spaniard believes the London outfit have enough about them to avoid the drop this season. He told reporters: “I give a lot of credit to Fulham.

“Fulham asked a lot from us because they want to play with good build-up – they didn’t come here to defend with long balls and set pieces. They came here to play. I like to watch these kinds of teams.

“Fulham ask a lot from their opponents. A lot. And we knew that. The example is the first minute and 30 or 45 seconds. They had the ball, pass, pass, pass, cross, corner.

Fulham are next in action against Watford on Saturday and they are 2.50 to grab all three points.

The draw is 3.40, while the Hornets are available at odds of 2.88. They then take on Millwall in the EFL Cup before Premier League clashes against Everton, Fulham and Cardiff City.