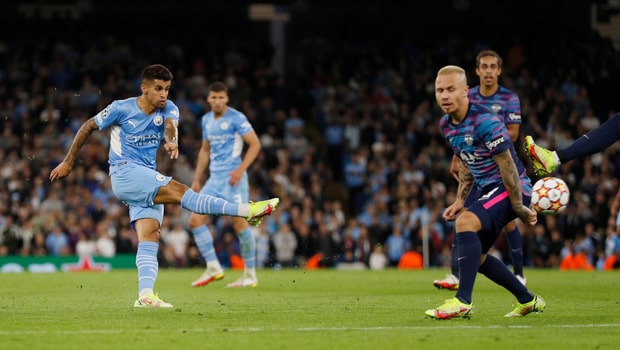 Manchester City scored six to see off stubborn German side RB Leipzig in their opening UEFA Champions League match for the season.

The game played on Wednesday saw the Cityzens scored twice in the first thirty minutes of the game first through Nathan Ake and the second coming from an own goal by French defender Nordi Mukiele.

However, French forward Christopher Nkunku scored his first goal of his hattrick on the night on the 42nd minute before Riyadh Mahrez restored City’s 2-goal lead from the spot.

Ferran Torres had a goal disallowed 11 minutes later but Nkunku was able to secure his hattrick on the night in the 73rd minute.

However, Joao Cancelo and Gabriel Jesus scored later in the game to secure a 6-3 scoreline victory for Pep Guardiola’s.

Meanwhile, it was also a goal laden affair at the Anfield stadium as Liverpool came from behind to beat AC Milan.

Fikayo Tomori had scored an own goal from a Trent Alexander-Arnold’s effort in the ninth minute to put AC Milan behind.

Mohammed Salah missed a chance to make it 2-0 as he missed a penalty in the 14th minute.

Quick-fire goals from Ante Rebic and Brahimi Diaz in the 42nd and 44th minute ensured Milan went into the break in front.

Mohammed Salah restored parity immediately after the break before Jordan Henderson slammed a low drive to put the Reds into the lead and get the win.