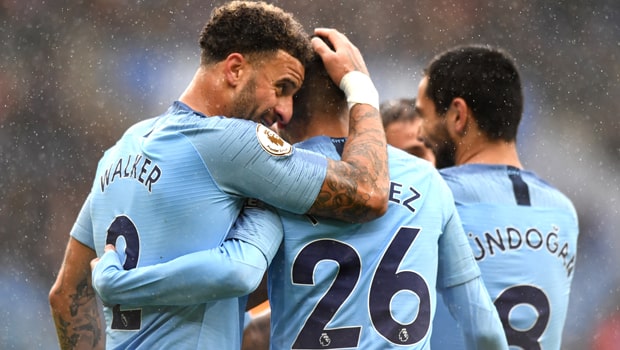 The Citizens, who can be backed at 5.25 to win the Champions League, had to cope without the England international for Saturday’s home meeting with Burnley in the Premier League.

Danilo’s absence through injury meant that John Stones was deployed at right-back and the former Everton man received rave reviews from Guardiola for his versatility.

Guardiola said: “I think it’s good for the young players like John Stones that they learn to play in different positions.

“It helps him become more intelligent, to understand the game more and he has more chances to play regularly because the manager needs him in other positions.

He can play three in the back, in a four too, but I think he can play holding midfielder because we only have Fernandinho.”

Saturday’s 5-0 victory over Burnley was pretty routine but Tuesday’s European assignment is likely to prove much tougher.

Guardiola is keen to have his strongest XI on the field as they look to avoid any further slip-ups in the competition after losing their opening game at home to Lyon.

Walker has been nursing a groin injury sustained on international duty and Guardiola opted to rest him over the weekend.

The Spaniard admits he wasn’t prepared to risk Walker and hopes that decision pays off by the time Tuesday’s rolls around.

He added: “He only played 10-15 minutes in Spain but they told me in that period he didn’t feel so good.

“Hopefully he can come back Tuesday for the game against Shakhtar Donetsk [in the Champions League], but he came back from the national team with a problem in part of his adductor and groin and some problems there and we didn’t want to take a risk.”