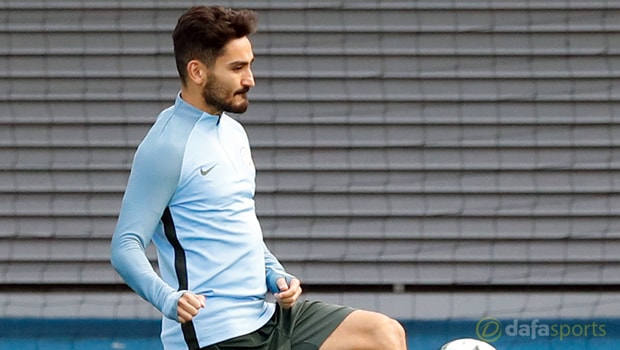 Gundogan limped off in the second half of City’s 2-1 Carabao Cup win over West Brom at the Hawthorns on Wednesday as Leroy Sane scored both goals for the visitors.

Gundogan was making his first start since December after recovering from a serious knee injury but was caught by Claudio Yacob when the Argentinian tackled him from behind.

Despite the setback, Guardiola doesn’t expect Gundogan to be sidelined for very long on this occasion.

The player is set for a scan on his right knee – the opposite of the one previously injured – but his manager is not too concerned.

“I think it’s not serious, it’s not eight months, but a little injury. Unfortunately the action is tough. He will be back soon hopefully.

Thursday we will make a test. The physio and doctor told me it’s not big issue,” said the Spaniard.

“I’ll have to review [Yacob’s tackle]. It’s from behind but I don’t know if he touched the ball or not. I didn’t see the image.

“Fortunately Gundogan is coming back soon. I suffer for him. He was on the grass and at that moment you think the wrong situation. You can’t imagine, for eight months, to be fighting every day alone.”

City fielded a much-changed side for the Hawthorns clash, with Yaya Toure making his first appearance of the season.

Guardiola added that he saw “many good things for our future” during the win against Albion.

City have been drawn at home to Wolves in the next round of the Carabao Cup and they are 5.50 to lift the trophy this season. Holders Manchester United are 5.50 while Arsenal are available at 7.50.