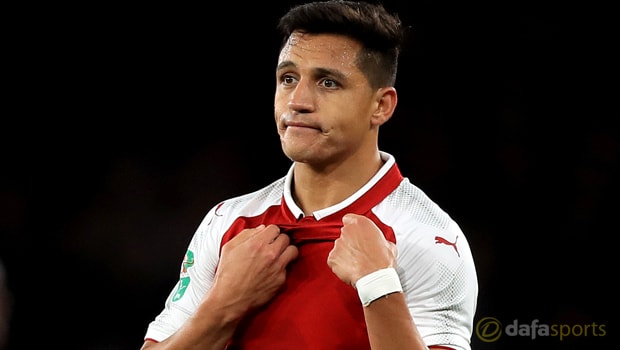 Arsene Wenger says he isn’t making an example of Alexis Sanchez over his summer wish to leave Arsenal.

The Chilean was heavily linked with a move away during the transfer window after he entered the final year of his contract and turned down offers from the club to extend his deal.

Manchester City were hovering with intent but no transfer was agreed and Sanchez remained an Arsenal player.

Sanchez is yet to complete 90 minutes in the Premier League but played the full match against League One outfit Doncaster Rovers on Wednesday night in the Carabao Cup at the Emirates, with Arsenal winning 1-0.

The former Barcelona man also played the entire game last week when Cologne visited in the Europa League before being benched for the trip to Chelsea in the league.

Wenger says he isn’t making a statement, but rather that Sanchez isn’t fully fit after an extended summer break and some injury problems.

“Not at all. That’s going into very quick conclusions,” said the Gunners boss.

“Alexis Sanchez has been out injured and I thought he was still a bit short on Sunday, physically I played him last night to give him competition.

“I gave him a long holiday, this year he had a real rest. He came back not really fit and then he got injured.

The injury plus rest time was a bit long, but last night you could see he’s coming back sharp now.”

Despite the impact Sanchez has had on Arsenal since he arrived at the club, Wenger says he fits into the squad the same as every other player.

“All the players are [equal]. He’s not more than any other,” Wenger added.

“I picked a team at Chelsea to be strong on the counter-attack and fight very hard. Sanchez could have played if he was 100 per cent fit but for me there’s no real hierarchy.”

Arsenal have been handed a home tie against Norwich City in the Carabao Cup last 16 and Wenger’s side are 7.00 to win the trophy this season.