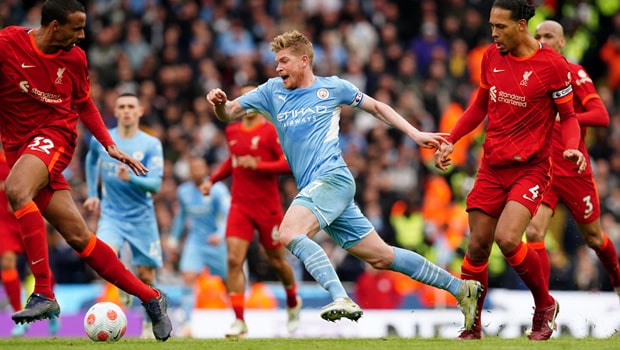 The Premier League title race hung in the balance on Sunday after Liverpool and Manchester City played out an entertaining 2-2 draw at Etihad Stadium.

A single point separated both sides before the game, which made the fixture one to look out for for the neutrals.

Many had tagged the game a title decider and expected a goal-fest. They were not disappointed anyways, as Manchester City took the lead just five minutes into the game through Kevin De Bruyne.

Sadio Mane equalized immediately after the break from a Salah assist, while Raheem Sterling thought he had given City the win in the 63rd minute, only for VAR to scrap the goal.

Both sides went at each other for the rest of the game, but the result means that the Premier League Champions for this season may not be known until the final game of the season.

With seven games left, Liverpool faces Manchester United next while it’s a home game against Brighton next weekend.

Liverpool captain Jordan Henderson is already looking forward to the UEFA Champions League second-leg clash against Benfica and not dwelling on mistakes.

“In football, you never know what is going to happen. The big games come thick and fast; there is no time to dwell; you’ve got to learn from this and take it forward and prepare for Benfica.” Henderson said.

In other Premier League games at the weekend, Norwich City could just have nailed Burnley’s coffin to the championship after beating the Clarets 2-0 at the Carrow road. Lees Melou and Teemu Pukki scored in each half to give the Canaries the win.