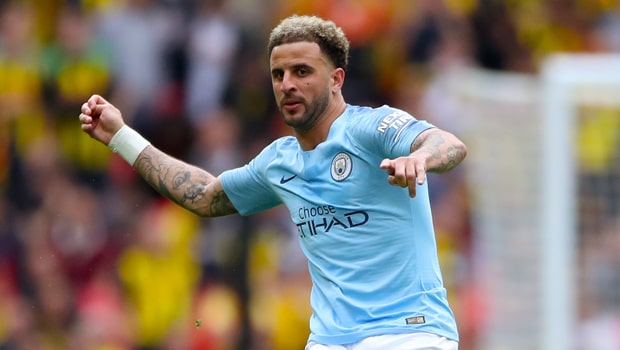 Kyle Walker says he is targeting more success with Manchester City after signing a contract extension. Walker’s new deal keeps him at the Etihad Stadium until 2024 and he says the decision on whether to commit to the club wasn’t a difficult one.

He said on the club’s website: “I’m thrilled to have signed a new deal, playing for City has been everything I’d hoped it would be and more.

“It was an easy decision. I want to be competing for trophies, playing at the highest level, and I feel I have improved hugely as a player during my time here. “The club’s vision – both on and off the pitch – matches mine perfectly and I’m looking forward to spending the new five years here, hopefully winning more silverware.”

The England right-back has been with City since leaving Tottenham in 2017 and has been part of a team which has dominated domestic football in the two years since.

They won the Premier League title in his first season under Pep Guardiola and followed that up with an unprecedented domestic treble last season, winning the league, the EFL Cup and the FA Cup.

City’s director of football, Txiki Begiristain, said he was delighted that Walker had signed a new deal, adding his experience had been of benefit to younger players.

City are spending much of pre-season in Asia, taking part in the Premier League Asia Trophy, playing West Ham in China before travelling on to Japan and then returning to the UK to meet Liverpool in the Community Shield on August 4.

The Hammers also provide City’s first opposition in the new Premier League season, Guardiola’s side travelling to the London Stadium on August 10 for a reunion with former City boss Manuel Pellegrini.

City are priced at 1.60 to win the Premier League for the third time in a row next season with Liverpool 3.30 and Tottenham 15.00.